Vanity, thy name is DONE

Remember, waaaayyy loooong agooo, I bought a cheap Craigslist dresser with plans to refinish it and turn it into our master bathroom vanity? Well, it has sat at about 80% completion for, oh, the last six months or so. We got the drawers in, but they lacked a certain je-ne-sais-quoi… namely, they didn’t like to OPEN or CLOSE. Call me high maintenance, but I feel like that’s an essential component of drawer-ness. After our frustration level escalated from side-eye to angry glare to outright cussing, we (Brandon) decided it might be time to do something about it. And so we were back to this. Sigh.

Yep, that’s the entire contents of the vanity, spread across the floor for extra easy access. Ten points if you can spot the dozen or so pee tests I took before I believed I was actually pregnant. And yes, I saved them…? I’m gonna go ahead and blame the hormones.

One of the big problems with the drawers was the bottoms, which appeared to be made out of what I’ll call “fancy cardboard.” It had started to warp and fall apart, and in fact completely collapsed out of one of the large bottom drawers. 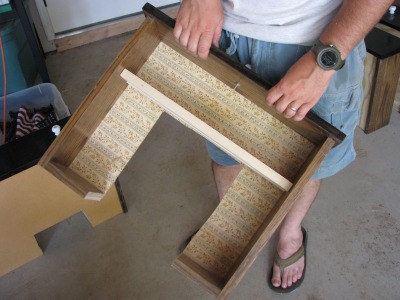 Brandon ripped them all out, and replaced them with plywood – they are MUCH more sturdy and less likely to randomly give out and dump toothpaste, deodorant, and contact solution into the void below the vanity. 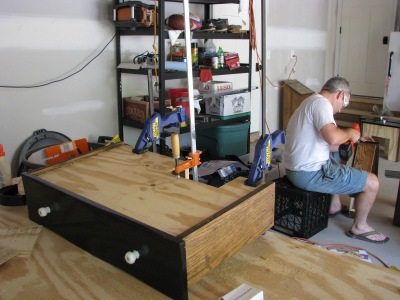 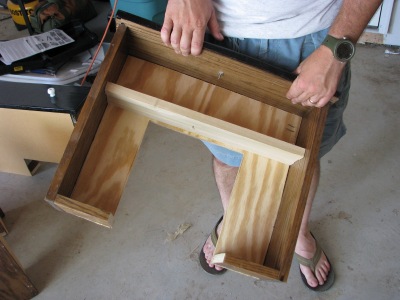 Along with reinforcing the drawers, Brandon took off all of the metal drawer slides, as they were the source of our INFERNAL DRAWER-FAIL ANGRRRRR. He decided to just yank them, and put wood supports into the frame of the dresser to support the drawers (should have photo’d these, but I forgot). He also took care of the last two “finishing touches” – installing the baseboard that I’d stained and poly’d way back when to cover the gap at the bottom of the vanity, and picking up some hinges so we could attach the door front that covers the middle set of drawers. To save you some scrolling, here’s where we sat a few days ago…

…and here we are now!

Suddenly it looks like a nice, substantial piece of furniture, rather than a repurposed Craigslist dresser. I love it! Big props to B for his hard work on finishing up this project; we all know if it were left up to me it might never zzzzzzzzzzzzzzzsnore