My friends are talented and awesome

Do you guys remember my friend Corey and his amazing Turtle House painting? Well, in the spirit of nursery-related news and bragging about how awesome my friends are, I had to share my latest art acquisition. These four panels (each about 10″x10″) were featured in a show Corey did in Columbus. 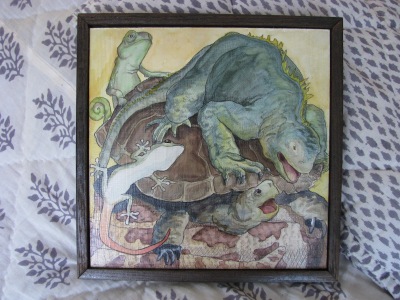 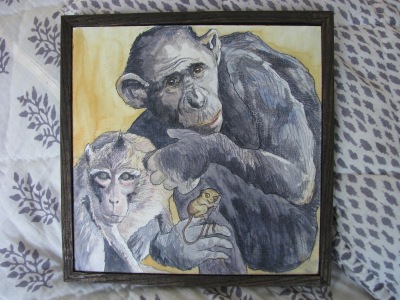 But sorry to the poor suckas who saw them at the show, because THEY WERE ALREADY SOLD. That’s right, I got an inside line on the awesomeness that is these paintings and I snapped them up right quick. When I first saw them, I thought “must go in nursery!!!!” (with four exclamation points). Then I immediately started to feel bad, like I shouldn’t put them up there because then no one will ever see them, and maybe they should be somewhere on the main floor of the house to be properly appreciated? But won’t Cletus love them, and wouldn’t they be such a perfect accompaniment to snuggling and reading Darwin at bedtime??

“There is grandeur in this view of life, with its several powers, having been originally breathed into a few forms or into one; and that, whilst this planet has gone cycling on according to the fixed law of gravity, from so simple a beginning endless forms most beautiful and most wonderful have been, and are being, evolved.” 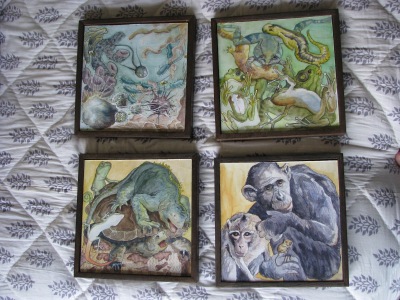 (Cletus, apologies in advance for sealing your fate as a complete and total nerd. Middle school is gonna be rough.)

So, you guys all have to pinky-swear promise that when you come over after Cletus is here, you’ll be all “OH CAN I PLEASE SEE THE NURSERY” even if you think mobile’s a city in Alabama and cribs is a show on MTV. Because then I won’t feel bad about wasting these super awesome pieces of art on a tiny human who is going to spend the vast majority of his/her time sleeping, eating, pooping, and admiring the amazingness that is having TOES attached to your FOOT. OMG.

Hopefully no one's tired of baby goat pictures yet 🥺💕
A few more cute baby shots by @mrbgroff 💕
This little girl made quite the entrance today, along with her sister and brother! I don't think I have the energy to type up all the details, but suffice it to say that the first doeling was breech and trying to come out at the same time as her sister. I had to "go in" as the goat folks say, push the second one back and rearrange the first one to deliver her back legs first. The second doeling popped right out on her own, but then the big buckling tried to come out ears & top/back of head first, and had to be repositioned as well. So thankful that everyone seems to be doing well, although we're all pretty exhausted. Hugely grateful to my wonderful goat mentor @ladybiker_07 who is so generous with her time and advice, and to @mrbgroff who hoisted up a goat rear end to help make it all possible. 😆 PHEW!
Sweet Molly is at day 149 today, and her ligaments are totally gone. She's stuck to me like glue whenever I go check on her. Nothing actively happening yet, but I'll hope to have baby goat pictures to share very very soon! 💕
Nobody tells you that if you get goats your gallery will be nothing but goat butts all spring
That's definitely not a goat
%d bloggers like this: