Well well, what have we here?

Dang, it’s been so long since I’ve posted that Blogger went and completely changed the layout of the “new post” screen… I feel so disoriented… where am I? Who are you? And what’s with all this paint on the wall?

This is the upstairs spare room, a.k.a. snake-and-guitar room, a.k.a. random junk room, a.k.a…. nursery?!?! Yep, the rumors are true, I am officially parasitized. 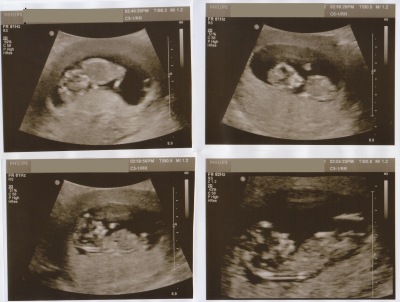 But ain’t it cute? I mean, except in that top right pic, that is some straight-up alien sh!t right there.

Cletus The Fetus will be arriving (and most likely renamed) on or around January 22, 2013. We are going to find out the sex (hopefully in early September, if Cletus cooperates), but we are definitely forgoing the pink-or-blue color selection for the nursery. In fact, B ruled out the blues in the pic above (L to R: Crystal Blue, Tranquil Blue, and Icy Blue, all Benjamin Moore and all left over from our frenetic whole-house paint selections last year) on the grounds that JUST IN CASE Cletus is a boy, he can’t have a blue nursery, too gender-normative thankyouverymuch.

I love green in theory, but we have so much greeny-yellow (Summer Lime) going on everywhere else in the house that all of the greens looked a little clashy from the hallway. So call me crazy, but orange it is. I have a somewhat long-standing obsession with partiality to orange home decor, so this isn’t really that shocking. That said, I also don’t want a color that will glow in the dark (I hear getting babies to sleep at night is recommended if possible), and a couple of these were just too bright. 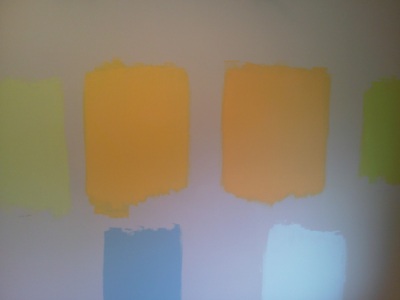 Nacho Cheese (L) (I REALLY REALLY WANTED TO BE ABLE TO SAY I PAINTED THE NURSERY “NACHO CHEESE”… SOB) and Sweet Orange (R). These colors do not look as psychadelic in real life as they do in this crappy cell-phone picture, but they were still pretty bright (and would probably be overwhelming in larger quantities). 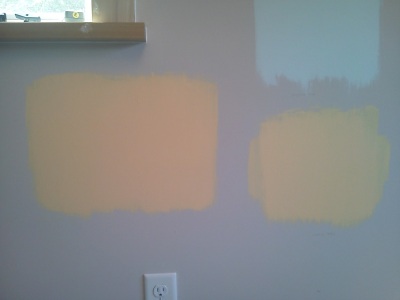 These are the colors one shade lighter than each of the ones mentioned above – Yellow Haze (L) and Morning Sunshine (R). I think something in this ballpark will work better given the very tall expanse of wall we have going on in this room. They look pretty washed-out here (again, crappy cell phone photos, sorry, have been meaning to buy camera batteries for ~2 months) but in real life they are still bright and cheerful without being ker-azy.

I really thought Morning Sunshine would be the winner based on the paint chip (OK, and the name), but in person it’s a little banana-y, and I wanted creamsicle. If that makes sense. Humor me, I’m pregnant. So anyway, I think Yellow Haze is the one, despite having the least cool name

And so ends today’s poorly-illustrated tale of paint selections and knocked-up-edness, and proof that YES I still know how to type, it’s just so haaaaaard to fit in between eating pickles and taking naps.

Oh, plus I owe you all an update to the dining room table saga that you probably don’t recall from three months ago. And when I say “saga,” I mean that the current “table” is still a discarded door (complete with knob, for extra class) perched on two sawhorses. Because we’re fancy.