Hope you all had a wonderful Thanksgiving! How many of you rushed home from spending time with your family and spent several hours caulking and priming trim? No? Just us?

I was very excited to get back to the house today, because we left on our whirlwind Thanksgiving trip straight from work on Tuesday evening, so we hadn’t seen the progress from Tuesday afternoon or Wednesday. And it was pretty dramatic! In fact, when we walked in I may have squeaked at a pitch audible only to dogs. 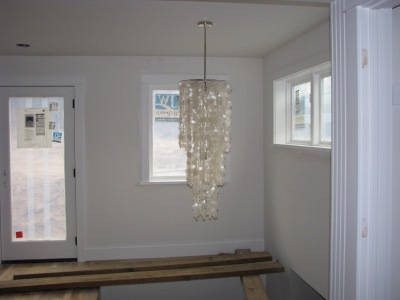 The jellyfish!!! is on the ceiling!!! Photos can’t even capture how sparkly and magical it is. I’m pretty sure it’s not really made out of capiz shells, it’s actually rainbows and fairy dust and unicorn poop.

I love it. I love it. I want to marry it. I also owe Steven big time on this one, because apparently after I saw this and fell completely in love, West Elm stopped carrying it! Steven, being a house genius AND a jellyfish/unicorn-poop hero, called all over the country to find one and eventually tracked down a floor model. Three cheers are not even close to enough cheers for Steven. Have I mentioned I love this chandelier?

OK, there are also some other light fixtures in the house, and I tried to be nice to them too so they wouldn’t feel left out. I think I did a good job ooh-ing and aah-ing over the pendant lights in the kitchen…

…but I am pretty sure the light in the guest bedroom might be getting an inferiority complex. Sorry, buddy.

The ceiling fan in our master bedroom might also be feeling a little bummed out. But let’s be honest, ceiling fans aren’t really all that cool looking. This one is better than most, though. 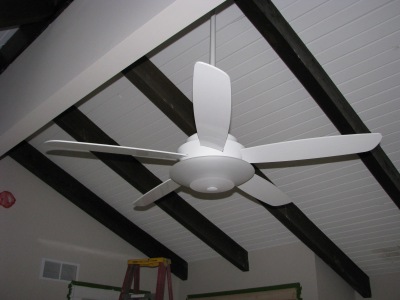 There are several wall sconces up around the stairwell and upstairs landing. To be honest, I’d totally forgotten what these were going to look like – good thing I like them. They are simple and don’t call a lot of attention to themselves. 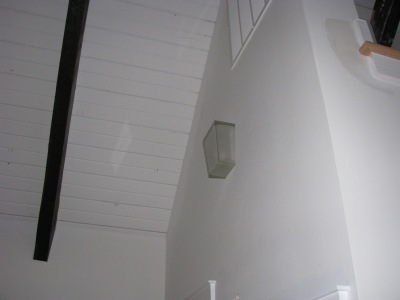 This is the cute bathroom light we picked out. This one is in the guest bathroom, but we got the same one in a four-light version for our master bathroom.

Speaking of the bathrooms, there was also some progress on the plumbing fixtures. In the downstairs bathroom, we have a pedestal sink currently in two pieces, but you can get the idea…

…and a toilet that isn’t quite connected to anything, but at least is no longer in a box in the garage!

The bath faucet, handle, and shower head have also been installed downstairs:

Upstairs, the tile installer finished the grout around the beautiful glass subway tiles, and the shower handle has been installed.

The sinks have also arrived for the master vanity. They are vessel sinks that will sit up on top of the refinished dresser (just how it looks in the picture below). Apparently the plumbers will take care of actually attaching the sinks and hooking up all the plumbing, which means the only thing I have left to do on this project is shortening the drawers to accommodate the plumbing. I am waiting until they get everything installed so I can take measurements and go have some fun with a jigsaw!

Swipe for a surprise garden buddy 🥰
This looks like a baby goat post, but it's really a @mrbgroff appreciation post. I had to be away from home the last few days teaching my field course. Not only did B milk a persnickety goat the whole time, he was also on baby watch because Molly was due the last day of my trip. And just like last year, she went into labor precisely on her due date! Brandon helped bring this little guy into the world during a thunderstorm yesterday while I was driving home. I bet he didn't think marrying me would result in a crash course in goat midwifery, but I sure appreciate him and his support and partnership in this adventure. 💕
@obrien.maisie we'll have some spuds for you in a few months! 🥔🥔🥔
I hope the cabbage white moths flying past the garden are crying big fat moth tears
Planted peppers today (even @mrbgroff's terrifying peppers of doom) and also some exceptionally puny and pathetic tomatoes. This spring I started a bunch of seeds in a mix that turned out to be crap and stunted everything. I'm hoping the outside world will cheer them up, but if not I'll need to go buy some starts. 🌱 STILL FUN TO BE IN THE GARDEN THOUGH
Nothing makes for a #happymothersday like some goofy garden decor and a pile of plants 💕
%d bloggers like this: