Brandon and I headed out to the house this morning to try to get some more trim painted… which soon turned into the realization that first we have to caulk the trim. Sigh. Why is there always another step (or four) before the step we’ve actually anticipated and at least moderately prepared for? Anyway, not to brag, but I am basically a wizard with a caulking gun. Caulk doesn’t make for good photos, though (NO DIRTY JOKES, my parents read this), so let’s turn to what the pros were up to.

Remember the shelving unit turned media cabinet? Brandon and I had primed it and added a back and a top and access holes for wiring, and yesterday B and the GC installed it so it could be trimmed out. It looks awesome!! Still needs paint, to be sure, but I think it’s going to be so great for getting all of our A/V stuff organized and out of the way. 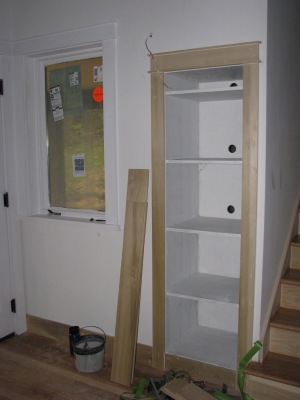 The electrician is putting outlets back behind there, so the rats’ nest of wiring can be hidden from view… but in order to access it, we’ll have to squirm through a tiny opening in the “hobbit room” (storage closet) off the dining room:

In the kitchen, the glass-fronted cabinet has been installed…

…and the beadboard on the pantry is primed and ready for paint. 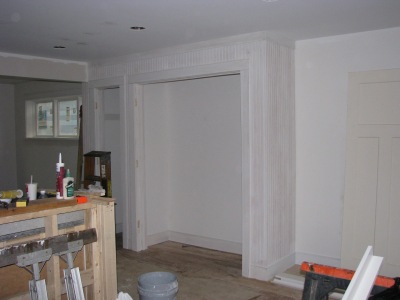 AND LOOK AT THESE MAGICAL THINGS THAT HAVE APPEARED THROUGHOUT THE HOUSE:

Have you ever seen something so exciting??? The electricians were still working when we left, and some of the lighting fixtures were piled up in the kitchen area – including the jellyfish! I can’t waaait to get back there and see what they’ve gotten installed.

In other news, I just got off the phone with a professional pond installer. No joke. When I described what Project Vernal Pool entailed, he said something along the lines of “oh, no problem. I’ve done ponds like that before, and all kinds of specialty wildlife stuff – I’ve even put in artificial crayfish burrows for rattlesnakes to overwinter in.” Um, I think I’ve found my guy.

Ran out of milk this morning so I brought my black coffee out to the barn to add milk. 😁 That fresh foam is better than Starbucks! Maybe we should open a (very niche) coffee shop. 🤣
Always trying to be just like mom 💕
Imagine how scary chickens would be if they were really really huge
File under "things your past self would be very confused to find your current self doing:" hiding copper supplements in dissected Fig Newtons for the goats. (They loved them!)
Hey lady, thanks for the hay refill! You ever tried this stuff?! It's great!!
I'll fight you for that coffee, chicken
%d bloggers like this: