Maybe because we can’t live inside Turtle House yet, we have been tackling numerous projects to enhance our ability to live outside Turtle House. Most of these have centered around the space down by the river. The story of this space actually begins last fall, when Brandon cleared and chipped massive amounts of shrubby undergrowth that had completely overtaken the shore. His hard work left us with a nice, flat area that is just perfect for some quality time hanging out by the river.

The first big project was building a dock, which B did as a birthday present for me! The first step was some pretty serious barrel transport (thanks, Tacoma and Uhaul!).

Here are a couple of progress shots. Since these were taken, he’s built a second 8’x8′ section so the dock is twice as long, as seen in some of the later photos in this post. 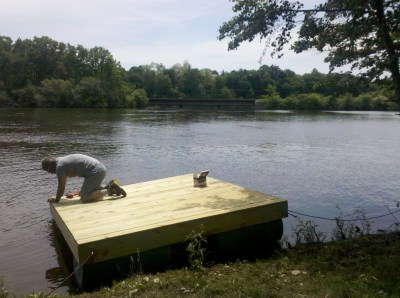 The dock has since proved itself to be a stellar place to dive into the river, hop into a kayak, or just lay in the sun.

No hanging-out-by-the-river scene would be complete without a good fire pit (and probably some s’mores to go with it). Our friend Frank gave us this big wheel to use as a fire pit, but Elmo apparently thought it looked like a good seat. 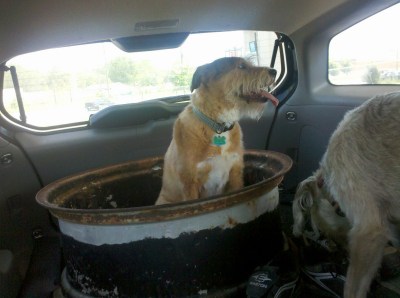 We surrounded it with some rocks from our neighbor Gary’s gravel pit, and it has already been the star of several fantastic cookouts!

A good cookout requires comfy seating for guests. Luckily we have this much beloved double Adirondack chair, which was actually made by Brandon’s sister Bri in high school. It was a happy fixture on our old porch in Ohio, and witness to many good times there. However, since we lacked a garage or functional basement for storage, it also weathered every rain-, hail- and snowstorm that passed through over the past few years. As a result, it was looking a little bit worn, with peeling finish that would stick to you if you sat in it.

After getting finish stuck to me one too many times, I finally got motivated to fix the situation. Let me tell you, sanding, priming and painting this beastie was not a small task – but so worth it in the end! I ended up applying two coats of primer because there was so much bleed-through on the first coat that I was worried about it showing through the paint. However, I must have been so excited to finish priming that I forgot to take a photo! Here is an interim photo, with the chair sanded and half-primed.

And finally, the finished product. It looks like a whole new piece of furniture, if I do say so myself! The color is Benjamin Moore’s “sailor sea blue.” I did two coats of that as well.

In situ with fire pit and adorable mutt:

And now apparently I’ve been bitten by the painting bug. After making the chair so purdy, today I turned my attention to the sturdy table that we use for cookout food prep. It may not be the prettiest thing ever, but the price ($0 on Craigslist) was right, and its unfortunate looks were nothing that some spraypaint couldn’t remedy.

A closeup of the top of the table… it needed help!

I bought a can of this Rustoleum all-purpose spraypaint in oil rubbed bronze, thanks to some inspiration from one of my favorite blogs, Young House Love. (This blog is a fountain of great house ideas that will not make your credit card bleed!)

After applying the whole can, I had gotten to this point:

That’s right – I RAN OUT with only the table top left to do. Let me tell you, I was supremely annoyed. However, it was looking amazingly improved already! The paint has a really neat metallic finish, and promises to prevent rust, so I hope this table will be serving up cookout fare for years to come. In any case, I’ll be making another trip to Lowe’s tomorrow to pick up a second can, so I will update this post with the finished product soon!

[Edit to add: Here is a photo of the table after another can of spraypaint – it was still a bit wet, hence the “blotchiness.” I think I will probably sand the top and add another coat at some point, but I am pretty happy with it!]

While at Lowe’s today, we also picked up three solar powered lights to add a little ambiance and avoid mishaps after dark. I put one by the small bridge I built to go over our stream, since it is between the cookout zone and the driveway where people park so it gets a lot of traffic after dark.

The other two are currently living by the dock, but may be relocated if they seem to be needed more elsewhere. 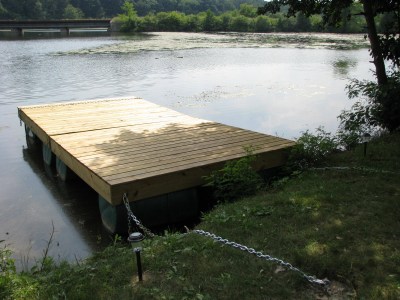 [Edit to add: I am really happy with these little solar lights. At night they look really charming and not at all too-bright – unfortunately I am a camera novice so this was the best I could do…] 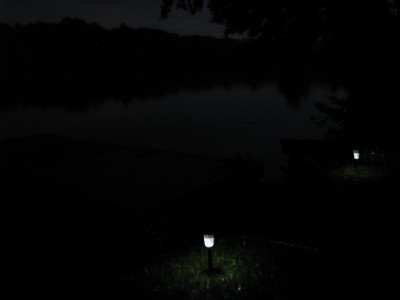 Finally, you can file this last project under “totally minor things that make me super happy because they indicate that we are actually going to get to live here someday.” (Then you should rethink why your file names are so long, that’s just ridiculous.) We got numbers for our poor, abandoned mailbox! We actually didn’t even know that we had a mailbox, since it’s up the road in front of a neighbor’s house. We even bought a new box, post, etc. and had to return them after “discovering” our wayward mailbox (including an archaeological artifact). It’s no wonder we missed it, given that the number was written in faded Sharpie on what looked like a crumbling piece of medical tape. 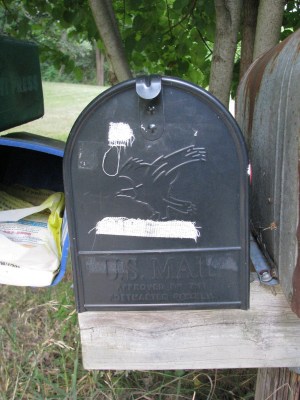 And here it is now, abandoned no longer! You can all start sending gifts and money right away.