Well it seems we have our first “wish we would have…” moment with the new house. Remember our master bedroom with the large interior window over the bed? Brandon and I have conflicting opinions about it. He is in the unreservedly pro-window camp. I enjoy the window in the morning, when I can peek out and see the river – but after living with it for a year-plus, I can also say that (a) it’s a bummer when people are in the living room and you’re trying to sleep; and (b) something about the empty space over my head just bugs me in an indescribably feng-shui-y sort of way. I can’t really explain, and Brandon thinks I’m nuts, but when I’m going to sleep I like to feel like I’m tucked in a safe little spot. The big open expanse of space just gives me a vague feeling of discomfort and kinda makes my skin itch. 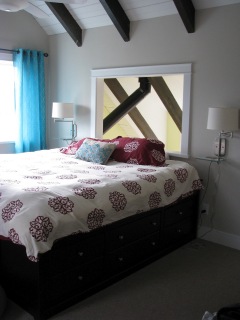 Anyway, all of the above has been applicable from the get-go… but now we’re going to do something about it. Why? Because we have added issue (c) OMG MY BABY COULD FREAKING FALL OUT OF THIS WINDOW SOMEONE GIVE ME A PAPER BAG TO BREATHE INTO. No, she’s not mobile yet, but it seems like she will be in… oh, another 30 seconds or so. So we asked Jeff to come back out and brainstorm some ideas for us for a window covering. The criteria were: lockable and secure!!! Followed in a distant second place by the “like-to-haves” of blocking the maximum amount of light and sound possible, and curing Katy’s neuroses (probably a reach).

Idea #1 was to do a barn-door style door on the living room side. I can’t find a good photo of this side right now, so here is a crappy cell-phone pic because lazy.

Imagine something like this. The issue is that we (Jeff) would have to do some finagling to make that work with the existing trim, because we’d want the door to sit flush to be secure and light-blocking, etc. etc. The other issue is that Brandon apparently has some deep-seated [aside: does anyone else always want to write “deep-seeded”??] barn door issues and has made us (me) all paranoid about the door falling off the wall and onto our heads. See also: scaffolding necessary, major living room disruption.

Idea #2 was one Brandon randomly threw out yesterday, when he said “I wish we’d thought of doing this while the construction was still ongoing – we could have just done a pocket door.” I think a little light bulb pinged on over my head when he said that. I hadn’t felt totally satisfied with the barn door idea, partly because I enjoy the way the window looks now – between the roof beams, the white decking, the hallway bannister, the stove pipe… there is a lot going on up there, and I thought a big sliding door might look a little cray (as the kids say).

So after some more brainstorming with Jeff, we realized this would still be possible – but it will entail removing drywall in the bedroom, some re-framing for the pocket door hardware, and reconfiguring the window trim… but he didn’t think there would really be a price difference if we take care of the drywall repair and painting after the fact. And thanks to my obsessive photo-documenting of this project, we know there won’t be any electric to deal with.

The tentative timeline is for Jeff to build the door in the next day or two, then drop it off so I can paint it. Then he’s going to come back Thursday/Friday of next week and we will work on getting it installed. We may have some additional drywalling going on in the near future, as part of an upcoming project – finishing off the basement to use as a play/rec room. More on that once I get some sufficiently dingy “before” photos.

So, I think I am on Team Pocket Door. What do you guys think? All I know is either way, I’m going to feel a whole lot better once this project is done.