My gosh, another year bites the dust. Out with the year we built Turtle House, in with the (first) year we get to LIVE in Turtle House! I could get used to this, but what does it mean for the blog? Well, my updates are going to be less dramatic, that’s for sure. However, we still have a lot of settling in to do, and a long list of projects to complete around the house (I’m going to write a post on this to keep us accountable!), so I plan to keep updating. Just don’t expect me to keep up the pace of the professional contractors, ha!

I wanted to share a few projects that have been completed in the last week, and then some photos of the house in its current state. First off, the wood stove pipe installers came last Tuesday to run the pipe out the ceiling. It was going to run straight up and out the dormer, but when the guys got up there and knocked on the ceiling they got worried because it sounded like a rafter was just exactly in the way of where the pipe was supposed to go. Lucky for them (and us), the house belongs to an obsessive photodocumenter (that would be me). I pulled up photos from when the dormer was being built, and yes indeedy, there was a big ol’ rafter in the way. The only option then was put an angle in the pipe – I like to describe it as “jaunty.” 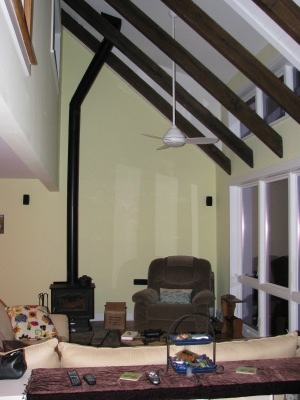 Hahaha. It looks a little funny, but it’s actually not very noticeable unless you’re someone who spends a lot of time looking at the ceiling. And it’s totally worth it for the fantasticness that is the wood stove. Here is B starting our very first fire. The installer told us that we should start it really tiny and build it up over the course of 3-4 hours, so that’s what we did. We have had it going pretty much constantly since then, and in fact we’ve been heating the whole house this way.

Another project that we wanted to tackle was getting the media cabinet set up. This involved squirming through a tiny access opening to plug everything in behind the shelf so we won’t see any wires from the living room. My cousin, his girlfriend and their dog were visiting at the time, so he got recruited to help out (thanks Josh!). As you can see below, this required some auxiliary equipment (headlamp and beer). The guys got it all done though, speakers wired and all, so now we can watch TV, stream stuff on the internet, or listen to records all from the same central receiver/projector setup. It’s fantastic. 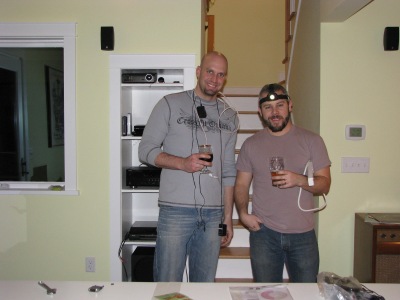 We really wanted to get this set up because we’d invited some people over for New Year’s Eve. Who hosts a party a week and a half after moving in? Crazy people, that’s who. So we spent a lot of time trying to make the main level of the house look moderately sane. I ran around and took some photos before everyone arrived. Starting off upstairs, here’s the bedroom, which is pretty clean but lacking in a bed. Our closets are still full of boxes of clothes, because we ordered one of those storage beds with drawers in it, and we’re waiting for it to arrive. Once I get the closet doors painted and some window treatments, this room will be done! For now, anyway.

This is the “little room,” the backup guest room upstairs. It has become the random junk room. Also note the unpainted but caulked trim… still some work to do here!

This is the stairway landing, where we plan to build in bookshelves. That’s not done yet, so instead we just piled all of the boxes containing books into the space where the shelves will be. It’s not quite the same effect.

However, things got better from there – for example, we had some exceptionally handsome butlers to meet the guests…

…and the living room looked pretty darn good if I do say so myself. 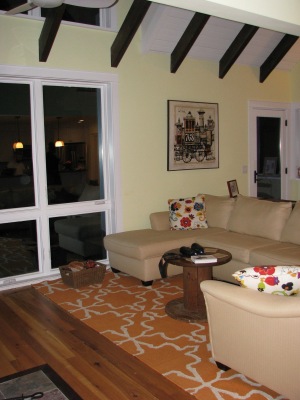 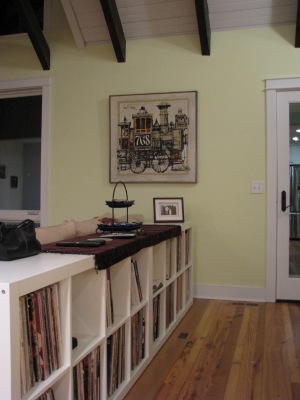 We set up a bunch of snacks along the bar – it was perfect because everyone always ends up standing around the food anyway, right? 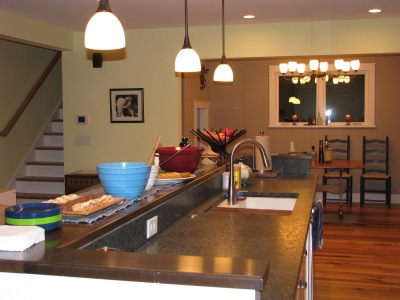 The dining room is looking a little sparse since we’re missing, um, a dining room table and chairs. We brought in the table from our old L-shaped breakfast nook so we’d have a place for drinks/desserts. Eventually I want to refinish (or re-poly) this table and bench set because it fits perfectly on the covered porch, so that will be its eventual home (when it’s warm enough to sit outside!).

Finally, I want to send the biggest thank you to our friends who came and helped us ring in 2012 in our new home. We had an absolute blast and received some of the sweetest and most thoughtful housewarming gifts – a new doormat (which we sorely needed), a great photo that a friend took and had printed on canvas, a home-brewed beer with a hand-drawn Turtle House label (I need to get photos of both of these to share!), and… drum roll please…

I am going to be in big trouble for posting this because it is not finished, but I just can’t resist. This is a painting by our amazing talented hilarious friend Corey. He took it away with him to finish it so we don’t have it hung up yet, but I’ve been scheming about a place of honor for it (probably in the living room). And, to be honest, I can’t think too hard about this without totally choking up about how lucky we are to have such amazing people in our lives. Happy New Year, everyone.

A few more cute baby shots by @mrbgroff 💕
This little girl made quite the entrance today, along with her sister and brother! I don't think I have the energy to type up all the details, but suffice it to say that the first doeling was breech and trying to come out at the same time as her sister. I had to "go in" as the goat folks say, push the second one back and rearrange the first one to deliver her back legs first. The second doeling popped right out on her own, but then the big buckling tried to come out ears & top/back of head first, and had to be repositioned as well. So thankful that everyone seems to be doing well, although we're all pretty exhausted. Hugely grateful to my wonderful goat mentor @ladybiker_07 who is so generous with her time and advice, and to @mrbgroff who hoisted up a goat rear end to help make it all possible. 😆 PHEW!
Sweet Molly is at day 149 today, and her ligaments are totally gone. She's stuck to me like glue whenever I go check on her. Nothing actively happening yet, but I'll hope to have baby goat pictures to share very very soon! 💕
Nobody tells you that if you get goats your gallery will be nothing but goat butts all spring
That's definitely not a goat
💕
%d bloggers like this: