The case of the missing refrigerator

It ain’t every day you can say that your refrigerator went missing. Yesterday, however, we could honestly claim this to be the case. As I mentioned in this post a week and a half ago, our appliances were scheduled for delivery on Friday 10/21. Our GC planned to be at the house that day, so we coordinated with him so he would meet the delivery truck and have them unload everything into the garage. We never heard anything further, and assumed (you know what they say about that) everything went fine – even peeked into the garage to ooh and ahh over the couple things that were unboxed (the range and microwave). As you’d expect when you’re acquiring a whole house’s worth of appliances, there were a whole bunch of big boxes. It wasn’t until a few days later that Brandon noticed the lack of a certain REALLY LARGE box… there was no refrigerator anywhere to be found.

I emailed the GC, who said that a fridge was never delivered, and that it hadn’t been on the list of items he got from the delivery crew. We found the list and indeed, no fridge. Cue a major sigh of relief, because when I talked to Lowe’s, they said their computer showed it as delivered! I was really happy that we had documentation that this was NOT the case. The delivery department was extremely helpful, though, and I talked to them several times while they tried to track down the rogue refrigerator.

Long story short (too late), it turned out that it had been damaged somewhere in transit, and so the delivery crew hadn’t delivered it. Apparently there was some confusion because it wasn’t in Lowe’s warehouse, but also wasn’t with the delivery company… but as I was told on the phone (and fully agreed with), none of this is my problem. They put in an order for a new fridge, and it’s supposed to be delivered sometime next week. Whew! The other one will probably show up somewhere having “fallen off the back of the truck”… Also, I feel like I just wrote some permutation of the word “deliver” about 100 times (drinking game, anyone?).

OK, if anyone is still reading, I have a design dilemma for you! Maybe should have considered leading off with this, instead of rambling about refrigerators for three paragraphs… The decision regards the fascinating topic of window trim (Brandon, stop rolling your eyes). The trim in the original design was to look like this:

The carpenter doing the installation felt like a little something was missing, and that it looked “bottom-heavy,” so he made this modification: 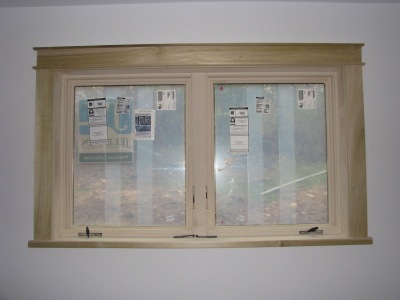 Can you even tell the difference? In the bottom pic there is an extra trim piece along the top edge. What say you, interwebs? Classic and simple, or a little more dressed-up? Brandon says it’s up to me – oh, the pressure!