Here is the promised “whirlwind recap” of the construction progress prior to 7/6/2011. There has been a lot of behind the scenes work, and A LOT of picking stuff out, but I’ll say more about all that in future posts. This one will just focus on the last couple weeks of site work.

The first sign of life at Turtle House was the appearance of a dumpster and a porta-potty — two items that you don’t generally associate with glee and excitement (6/21/11): 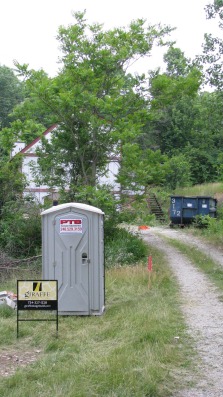 That same day they also demolished the decrepit outdoor deck on the northeast side of the house, resulting in an interesting “stairway to nowhere”…

The next day continued the demolition theme, with a bunch of debris turning the “stairway to nowhere” into a “stairway to large pile of debris” (6/22/11): 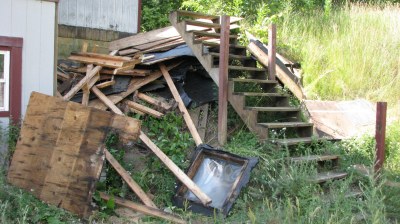 Doug and the rest of the carpentry crew also ripped the icky, rotting flat roof off the west side of the house, replacing it with a tarp that cast some pretty neat light into the future dining room:

The next week we really started to see some progress. The stairway to nowhere was completely removed… (6/29/11): 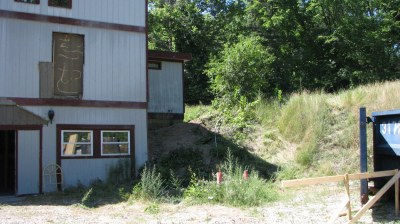 …and we’re pretty sure we know where it went: 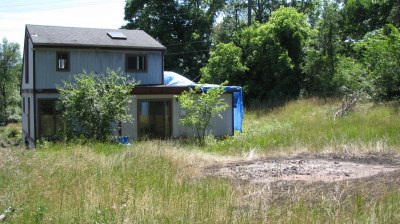 A whole bunch of materials showed up, including large stacks of wood:

The carpentry crew sistered all the joists in the main floor, to help stabilize everything and remove the “trampoline floor” feature of the house.

They also leveled the main floor using these shims. These look frighteningly flimsy to me, but apparently these small bits of wood are now holding my house up… 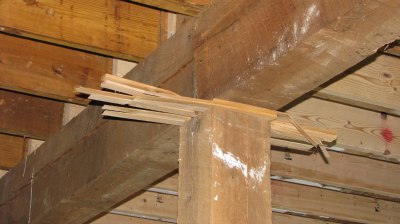 Most exciting (to me), they started framing in walls on the main floor! It was so cool to see the layout (that we’d spent so long thinking about) start to come to life. This is the view from the dining room into the guest room: 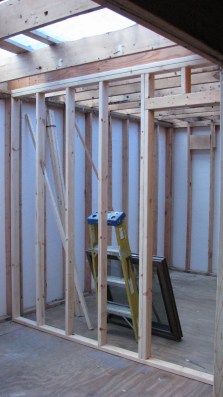 And turning the other way, from the dining room into what will be a wall, behind which will be the stairwell (you can see where the landing will be):

The next day (7/1/11) I remembered to document the super official looking permits for the construction site.

We also finally said goodbye to the offensively ugly chimney that had blighted our poor little ugly house (OK, among numerous other blights).

Also, the future dining room got a roof! This is where the old flat roof used to be, and where we are adding another room on the second floor. 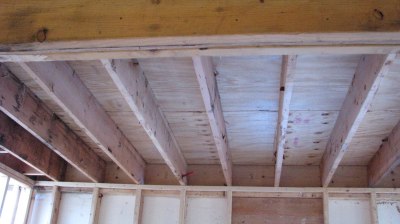 The morning of 7/1/11, Brandon and I met the crew at the site to help/document the crazy process of getting our MASSIVE new ridge beams from the ground to the top level of the house. This amazing process was really worthy of its own post, but suffice to say we were incredibly impressed by the ingenuity of rigging, pulleys, and trucks that managed this feat. Here is Brandon with the massive beams:

And here are some shots of the process… 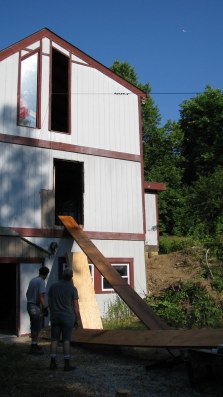 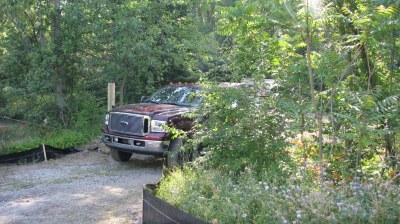 Finally, they also shored up the ceiling in preparation for removing all the strange scaffolding up there, and replacing it with the new ridge beams. Brandon and I thought it looked like they were getting ready to build a boat. 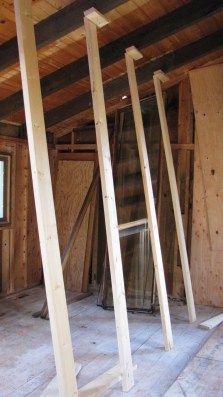 And that brings us all the way to yesterday (phew!), 7/5/11. Yesterday marked the beginning of the excavation work, which will apparently be ongoing tomorrow. They dug the area where the new entryway will be:

And then started work on the foundation for the garage, but hit a snafu when the gas line was not where it was expected to be. As of now, we are expecting the gas company to come out tomorrow to look into options for moving the gas line so that foundation work can continue. The excavator also has a bunch of work to do in the backyard where the geothermal loops are going to be. While the excavator was there, the driver offered to get rid of Brandon’s nemesis, a.k.a. the unnecessary cinder block wall next to the boat house… see ya, cinder block wall!

And… I think that brings us up to date! I will be adding more background info in other posts, but now I should be able to post quick construction updates for friends and family (and myself, when I’m happily moved in and need a trip down memory lane!).