I haven’t posted here in a long while, mostly because there’s been no “house news” to report–and after all, this is/was a house construction blog. Life has trucked along, my beautiful girl is 3 (“and a half!”), and I still stare out the window every day reflecting on how lucky I am to call this place home. 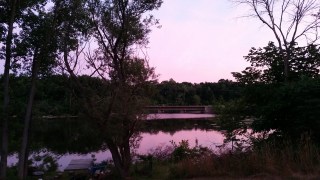 Now that we are well and thoroughly settled in, and Matilda is old enough to play on her own or even help out, we’ve gotten back into gardening. I have a lot to say about this, and a lot of progress to document, and so I thought this blog would be a good place. I am 100% enamored with the philosophy of permaculture, and have been watching and reading everything I can get my hands on when it comes to this topic. I find myself daydreaming about plans for the garden, and feeling 100% peaceful when I’m out there weeding and watering and harvesting. I had forgotten how much I need to grow food, get dirty, and smell tomato plants.

This need came into sharp relief in May, when I lost one of the most important people in my life, Sidney Greenwald. My beloved grandfather. In lieu of spending more words trying to explain what he meant to me, and what it has to do with the garden, I am going to paste below the text I wrote for his funeral service. 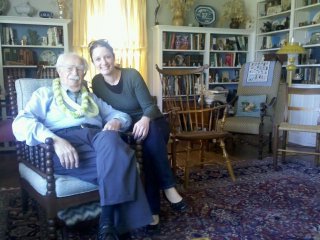 When my mom first asked if I wanted to speak here, I was unsure. What do you say when you lose one of your favorite people? What are the chances I’d be able to say anything at all, without crying? How could I possibly summarize my relationship with the man I named “Bakka” in just a few minutes? I can’t… so instead I just thought I’d tell a few stories.

My grandmother passed away when I was a freshman in college. I was just down the road at Brown University. She and Bakka had had tickets to everything, it seemed—so after she was gone, I started going with him. Every few weeks we’d head to the symphony, or a play, or an event at RISD. He loved going to the Philharmonic. Every time we heard a piece by a “big name composer—Beethoven, Bach, Mozart—he’d make the same joke: “This guy shows promise. He’s really going places.” It made me laugh every time. It was like the ultimate dad joke.

It’s been a running joke in our family that half of the stuff in Bakka’s house should be featured on Antiques Roadshow. After Matilda was born, he found a little silver rattle in the back of his china cabinet. When we found that rattle, he immediately went on an Antiques Roadshow-inspired riff: “Well, if you hadn’t rattled it, it would have been worth $175,000! Since you rattled it, it is valued at… five bucks.”

A lot of things have made me cry over the last few days—some expected, some unexpected. Pulling out and shaking that little silver rattle was one of the expected ones. One of the unexpected ones was weeding the garden. After I heard the news that Bakka was gone, all I could do the next couple days was work in the garden. I would try to get other things done, but my mind just wasn’t there. So I would head back out to our garden, and weed. And weed. And weed. We haven’t had a garden the last couple years, because we had a baby and couldn’t find the time, so there were plenty of weeds. As I was weeding, I remembered that this was one of the things Bakka and I always used to talk about—the garden. What I’d planted, how the different veggies were doing. He’d give me tips on the soil and watering schedule. As I was weeding, I realized that I hadn’t gotten to tell him that we were gardening again. I hadn’t told him the list of veggies and flowers I’d planted, or about how a week after we planted them, we had a darn frost advisory and had to cover them all with pots and sheets. So I decided I’d tell you all about our garden. We have tomatoes, and beans, and peppers, and peas. Brussel sprouts. Greens and herbs, Zucchini, squash and pumpkins. We planted phlox, columbine, and foxglove by the front door.

It was hard to explain that Bakka died to our three-year-old. She kept asking where he is now. We told her that’s a big question, and no one really knows, and different people believe different things. All we can say for sure is that our bodies are made up of the same stuff as trees, and birds, and flowers, and all of the rest of life. We get to be us for a while, and then that stuff goes back to the earth to make other things. She keeps asking “is that flower Bakka? Is that tree Bakka?” All I know is, when I’m in the garden this year and always, those plants will be Bakka, and I will think of him, and miss him, and be incredibly thankful to have known him. 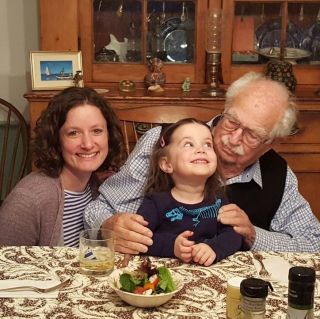